Functions of Insulin Hormone & How It Affects the Body Before getting into the functions of insulin hormone, let us understand what is Insulin? Insulin is the hormone that is responsible for allowing the glucose in your blood to get into your cells, giving them the energy to work. The pancreas responds by producing insulin, allowing glucose to enter body cells for the purpose of providing energy. The pancreas secretes a hormone, insulin, that allows glucose to move from the blood to the cells. It is in its role as an endocrine gland that the pancreas produces insulin, along with another hormone called glucagon. Human insulin is used to treat diabetes mellitus type 1 (insulin-dependent) and 2 (non-insulin-dependent).

Insulin is a hormone that regulates blood sugar levels in our body. In humans, it is produced by beta cells in the pancreas. Insulin helps regulate glucose (sugar) levels in the bloodstream. Food breaks down carbohydrates into glucose molecules when we eat it. A person’s bloodstream carries glucose to various parts of the body for use as energy. If too much glucose builds up in the bloodstream, the liver produces insulin to help move it out of the system. This is called insulin resistance. Insulin resistance can lead to diabetes.

People with diabetes need to control their insulin levels. There are various types of processes to take insulin. They can do it either by using insulin injections, syringes, or by using insulin pumps. INSUL by AgVa is the new-age technology-based insulin pump for diabetic patients. It is designed to ease the process of providing insulin to diabetes patients.

Insulin Process in the Body What are the various Insulin problems?

Insulin resistance: The first issue people experience when they have diabetes is high blood sugar levels. This causes damage to the eyes, kidneys, nerves, heart, and other organs. People who have diabetes often feel tired, weak, and thirsty. They may also have blurred vision, dry skin, frequent infections, and an increased risk of heart disease. This can result in high blood sugar levels and diabetes. In some cases, this may lead to obesity, heart disease, and other health issues.

Hypoinsulinemia: Hypoinsulinemia occurs when your pancreas produces less than normal amounts of insulin. This causes your cells to become resistant to insulin and leads to poor glucose control.

The various types and functions of Insulin hormone There are two types of insulin: Regular insulin and Lispro insulin.

Regular insulin has been used for many years in hospitals and clinics. Regular insulin is a type of insulin that has been purified from human urine. In diabetes mellitus, this insulin forms the basis of treatment.

Lispro insulin on the other hand was developed in the 1980s and is now widely used in diabetic patients. Lispro Insulin is a fast-acting insulin that helps control blood sugar levels before meals. Diabetes patients should use this type of insulin because it works faster than regular insulin.

Now let us look into the various functions of insulin hormone below.

Understanding the functions of Insulin Hormone

One of the major functions of Insulin hormone is to control blood glucose levels and prevent hyperglycemia. The second most important role of insulin in the human body is that it interacts with glucose, to enable cells of the body to use glucose for energy. Insulin has many functions, but its primary duty is converting the glucose (sugar) in what we eat to a form that the body can use as energy. The primary actions that insulin has been allowing glucose into cells for use as energy, and keeping the amount of glucose found in the bloodstream at a normal level. 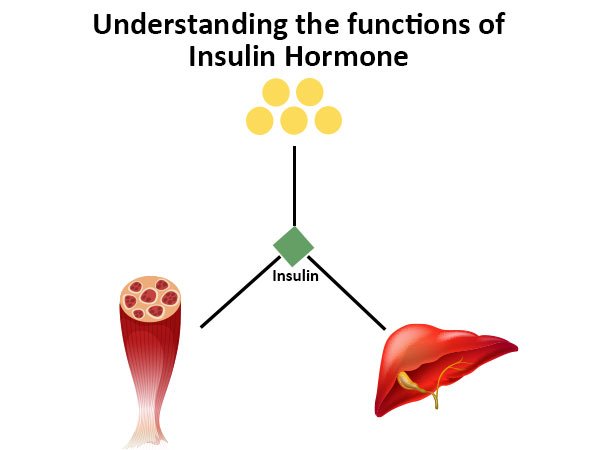 Role of Insulin hormone in managing Type 1 Diabetes: A person with type 1 diabetes does not produce enough insulin to keep blood glucose levels normal. Without insulin, glucose stays at elevated levels in your bloodstream.

Role of Insulin hormone in managing Type 2 Diabetes: The pancreas produces insulin at first, but your body’s cells are unable to use the insulin well. People with type 1 diabetes have missing or dysfunctional beta cells, so they lack the hormones insulin and amylin, and GLP-1 cannot function normally.

Are there any other functions of insulin hormone?

Definitely yes, Besides regulating glucose levels, insulin has a number of other functions in the body. Insulin may play a role in:

What will happen without Insulin in our body?

Without insulin, your blood sugar level would rise and fall rapidly. This can lead to hypoglycemia (low blood sugar) and hyperglycemia (high blood sugar). Hypoglycemia can cause confusion, drowsiness, dizziness, headache, irritability, hunger, sweating, weakness, shakiness, and even seizures. Hyperglycemia can cause blurred vision, dry mouth, fatigue, nausea, palpitations, trembling, and vomiting. It is important to treat either condition as soon as possible since both are dangerous.