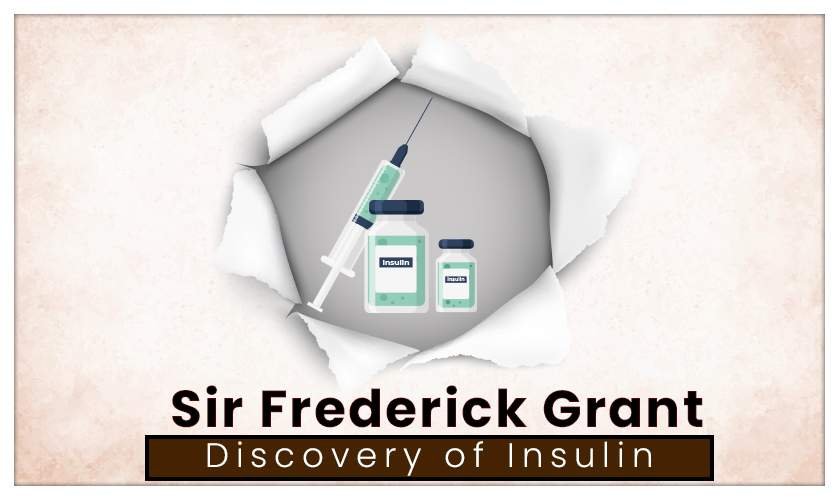 Insulin is a hormone produced by the pancreas and digestive gland located inside our body, which allows the body to use the sugar from the carbohydrates we get from the foods we eat and the stored glucose for later use. If the pancreas does not secrete insulin in the blood in the proper amount for a long time, then it increases the amount of sugar in the blood and leads to the disease of diabetes. For the treatment of this disease, scientists have prepared a drug which is called ‘insulin’. So let us tell you that it was discovered by Canadian medical scientist Sir Frederick Grant Banting in 1921.

History of the Discovery of Insulin

Scientists did not know how diabetes occurs. What is the reason? Gradually this was new information for the western world. In 1775, Matthew Dobson revealed that not only is the patient’s urine sweet, but sugar is also found in his blood. This made it clear that diabetes is not only a disease of the kidney, but it is also related to the metabolism and digestion of the body.

Many small and big discoveries have been made which have proved to be very helpful in the discovery of diabetes in the future. French scientist Bernard Clode said that with the help of an enzyme, sugar is made in the liver. In 1869, Paul Langerhans discovered some special cells in the pancreas, which were named Islet of Langerhans.

Despite the above discoveries, no special scientific direction was being found in this field. 129 years ago today, in 1889, a discovery by chance showed the scientists the right path. Scientists named Oscar Minsky and Joseph Van Mering were trying to find out whether a dog could survive without a pancreas. One day Minsky cut the pancreas out of the dog, the dog remained alive, but all the symptoms of diabetes appeared in it. It was also discovered that the dog was no longer able to digest fats and proteins properly, due to which it was decided that the secret was now hidden in the pancreas itself.

The clue to diabetes was discovered in the early 19th century. In 1901, Eugene Lindsay Opie reported that the cells of the Islet of Langerhans in the pancreas of people with diabetes undergo changes. Taking this as the basis, Dr. Georg Ludwick Zülzer in Berlin in 1908 prepared a squeeze of the pancreas and tried it on eight patients with diabetes, the condition of the patients improved significantly, but toxic effects were also observed, as a result this work remained here. After this Sir Edward Shapy named this chemical “insulin” from the Latin word island.

Renowned physiologist Dr. J. R. McLeod entrusted the responsibility of preparing insulin to scientists named Frederick Grant Banting and Herbert Best. The pair of Banting and Best received no financial incentive to work in the laboratory, nor did they know of Zeusler’s work as they did not know the German language. Banting and Best prepared a pancreas extract and tried it on dogs. They found that the amount of sugar in the urine of dogs without pancreas was surprisingly low. MacLeod was overjoyed when he came back from a three-month trip to Scotland. He asked to write a research paper on it.

After this, the squeeze of the pancreas was tried on the patients, then it had a toxic effect on many patients. Once again, it seemed that the problem was repeating itself, so Dr. MacLeod, as a skilled director, thought of purifying the extract, entrusting the task to the biochemist James B. Callip. Callip solved this problem in a few days and prepared pure insulin.

In January 1922, the use of insulin began. It was first tried on deteriorating diabetics, after that the eternal story of insulin went on. The result of this useful human discovery is that today millions of people are getting new life-giving, many deaths are being prevented. The diabetic person is now able to lead a normal life and now diabetes has been copied in the form of insulin in the human hand, because insulin has now become a life saving drug.