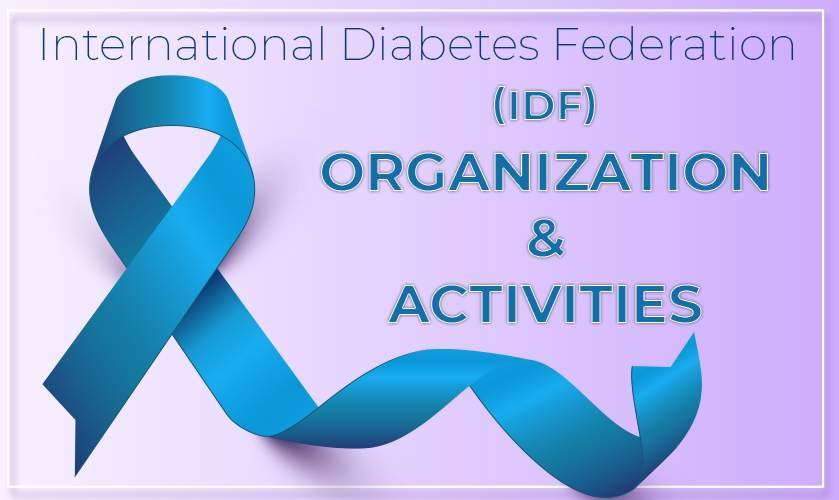 The International Diabetes Federation (IDF) is an umbrella organization (an association of institutions, who work together formally to coordinate activities and provide resources, identity to the smaller organizations). These 230 National Diabetes Associations are present in more than 160 countries and territories. This has led to the global diabetes community since 1950. It’s headquarter is in Brussels, Belgium. It represents the continuous growing numbers of people with diabetes. IDF’s main goal is to advance diabetes care, prevention and cure around the world.

This federation of collaborators includes people with diabetes and their families; professionals involved in diabetes healthcare and related fields; diabetes representative organizations, which always line up with the mission of the Federation.

Activities in which the IDF contributes include advocacy and lobbying work, education for people with diabetes and their healthcare providers, public awareness and health improvement campaigns, as well as the promotion of diabetes knowledge. Such as World Diabetes Day, the primary awareness campaign of the diabetes world, marked every year on 14 November. As a result, this was initiated by United Nations Resolution 61/225 in December 2006. The term “World Diabetes Day” is an official term which was first started by the United Nations with an official holiday specified as “United Nation day”. The campaign is constituted by a blue circle, which is the universal symbol of diabetes.

Diabetes-Rising worldwide… and is set to rise even further

According to IDF Age profile of diabetes People

1) Children and adolescents (aged under 20)

In 2019, people with diabetes are 11crore. 1 in 5 people in this age group is estimated to have diabetes.

It is projected that by 2030 the number of people over 65 with diabetes will further increase to 19.5crore. By 2045, it will reach 27 crore 6 lakhs. This information highlights considerable expansions in the diabetes populace of ageing societies in the next 25 years

Economical Impact Of Diabetes All Over The World

Diabetes increases the risk of early death. IDF estimates that approximately 4 crore 20 lakh adults will die as a result of diabetes and its complications in 2019. This is equivalent to1 death every 8 seconds. This affects the world economy through direct and indirect costs.

Diabetes is one of the quickest growing health challenges of the 21st century. This has increased the prevalence of diabetes worldwide is driven by a complex interplay of socioeconomic, demographic, environmental and genetic factors. The continued rise is largely due to an upsurge in type 2 diabetes and related risk factors, which include rising levels of obesity, unhealthy diets (higher calorie intake, increasing consumption of processed foods, sedentary lifestyles) and widespread physical inactivity, with the number of adults living with diabetes having more than tripled over the past 20 years.